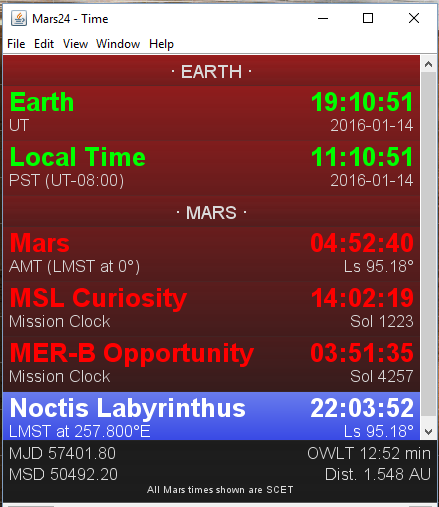 There are several versions of Mars Clock apps

As humans expand their reach, time becomes a major issue. Before the invention of machines that could transport people over long distances in a short time period, all time was local. When the Sun was directly overhead in a village, it was noon.

However, as transportation and communication advanced, so did our recognition that the time of day was different depending on the location. The railroads in Europe were the first to establish a ‘standard time’ that later became know as Railway Time.

However, with space travel, a time standard based on Earth isn’t compatible with keeping time on another planet. We’ve already discussed this issue in a previous article (SEE: A Matter of Time,) but there is more to this issue than just when the Sun rises and sets on two different planets.

The Mars Mission has four Earth-based Operation Control locations. (San Jose, California, USA; Kumamoto, Kumamoto Prefecture, Japan 熊本市; and the twin Operation Centers in Figueres, Spain and Perpignan, France.) In addition, we have our launch facility near Arica, Chile. For simplicity the workers and crew have been on Pacific Standard Time; however,  on 30 January all mission operations on Earth, and in orbit will switch to Mars Noctis Standard Time (NST.)

This will eliminate confusion by Earth-based operations as to what time it is for the Mars Alpha Base (once it is established) and avoid interruptions during their sleep cycle. As teams for previous robotic missions to Mars have known, this creates and odd situation for them, because of a forty-minute difference between a day on Earth and a day on Mars. All Mars Operation Control locations will be on shifts of six hours and ten minutes each (plus a one hour briefing before each shift,) with the next day beginning 40 minutes later.

For the crew and the support staff of the Mars Mission, the question: “What time is it?” will require knowing what time it is on Mars at that moment.