The geography of Mars is complex and unique, but there are five things every human should know about Mars.

One:  It’s Called Areography
The word ‘geo’ refers to ‘of Earth.’ The study of the surface structures of Mars is called areography after the Greek god of war, Ares, counterpart of the Roman god of war, Mars.

Two:  Mars is Two-Faced
The northern hemisphere of Mars can best be described as a big ocean bottom. Much of the northern hemisphere is a low flat plain with few craters. We don’t know for sure what happened, but the best theory is that Mars was hit by a Pluto-sized dwarf planet at about a 45° angle early in its formation.

In contrast the southern hemisphere consists of elevated areas, including one of the highest mountains in our solar system, large regions of crater impacts, and surface canyon features that can be easily seen from orbit.

Three:  ‘Zero’ Altitude on Mars is Not Based on Sea Level….Obviously
On Earth we have a hypothetical average sea level based on 19 years of recordings to serve as our ‘zero’ altitude standard. On Mars there is no ‘sea level,’ so scientists developed a standard based at the air pressure level that water becomes unstable (the triple point of water.)

However, in 2001, scientists adopted a new standard based on data from the Mars Orbiter Laser Altimiter (MOLA) mission. This standard, called the datum, or datum point, cannot be explained in one paragraph. Suffice to say there is a ‘zero’ elevation on Mars, and like Earth, it is not based on any particular areographic feature, but on a hypothetical altitude determined by scientists.

Four:  Olympus Mons is Really That Big
Mars is half the size of Earth and has an extinct volcano that is twice as high as Hawai’i’s Mauna Kea (from seabed to the highest point) and three times the height of Mount Everest (Nepal’s Sagarmāthā). It is so tall that the the top of it remains in sunlight long after the Sun has set in the lower elevations surrounding it.

Olympus Mons at the upper left

Olympus Mons is 21 km (13 m) above the Mars global datum, or zero altitude. It is the biggest of four massive volcanoes in what is known as the Tharsis region.

Five:  The Big Hole
The equator and southern hemisphere of Mars is areographic candy store of features, but after Olympus Mons, the one that is hard to miss is Hellas Planitia. 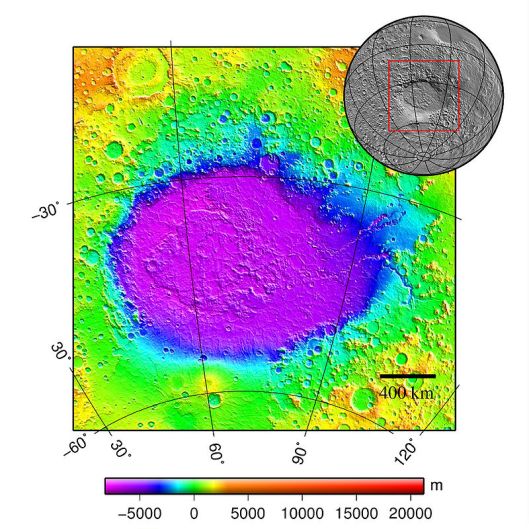 Hellas Planitia:  Almost all of the Hawi’ian Island chain could fit inside